The Planet Eclipse Emek is a compact, lightweight, and sturdy paintball marker that offers great shooting performance. It is a practical option for those looking for an exciting mechanical marker experience.

Spending time with your friends at the paintball playground can make for such a fun time, but it gets even better when you have the right marker by your side. This is why many paintball enthusiasts go out of their way to invest in a quality paintball gun with the ideal combination of features to give them an edge over their rivals.

One paintball marker that has generated significant interest from the paintball world is the Planet Eclipse Emek. Developed from the industry popular Planet Eclipse Etha 2, this entry-level marker delivers an impressive price-performance ratio that you won’t find in its competitors.

This mechanical marker is a jack of all trades, combining durability and ease of use to deliver high performance in any game scenario. It promises to keep on going week after week without letting you down.

Whether you are just catching the paintball bug or have been in this industry for a while, you might want to try out the Emek and test its mettle. The following will give you an idea of what you can expect from the Planet Eclipse Emek.

The first time I picked up the Emek, what hit me first was just how lightweight it is. The marker fits right in line with the lightest paintball guns you can find in the market at a mere 1.87lb, ensuring that you won’t tire easily from running up and down the battle zone.

The gun’s outer shell is made using strong glass-reinforced nylon whereas the bottom-line adapter features an aluminum material to provide an easy to carry yet sturdy construction.  It has a nice, stretched out feel that has become popular in quality markers for a stable gunning and running platform.

The Emek is not only light but also feels natural in your hands, providing a sense of comfort than most similarly priced guns. It has a small to medium size and comes with rubber grips to ensure that it remains clutched in your hands when you run, crawl, or roll on the ground during a battle.

The trigger is also easy to pull yet still provides you with a firm return. You can easily achieve speeds of 10bps but 7-8bps would be a safe bet for continuous rates of fire. While there are other guns with super light triggers that enable you to shoot faster, few match the level of satisfaction you get from the Emek’s trigger.

At the heart of this amazing marker is the Gamma Core drivetrain which blends reliability, a smooth shot, and ease of maintenance. I tested my first Emek in different rough scenarios, offering it to paintballers of varied skill levels to shoot it and it didn’t skip a beat.

You will definitely appreciate the level of beating that this gun can take and still shoot like it’s just fresh out of the box. I also took it through multiple cases of brittle Ultra Evil tournament level paint without breaking a ball.

Perhaps the only grievance I have from its performance is that the barrel could use an upgrade. The 10-inch barrel has little porting which is usually necessary for quieting the sound signature. Besides, I found that a 12-16-inch barrel seems like an ideal length for users to properly aim.

I’m not saying that the gun is loud but a slightly longer barrel with additional porting will have a noticeable difference in volume. A 12-inch one-piece barrel would actually make for a better sound signature, although this should not be a deal-breaker.

This paintball gun is simple to handle, allowing even those who are still new to paintballing to shoot fast and straight with little trouble. The safety indicator has been positioned on both sides to easily inform the user whether the trigger is on or off.

Planet Eclipse has also kept things simple on the Emek when it comes to reliability and maintenance. You simply need to aim, shoot, and the paint will go where you want it to. The gun doesn’t care that you are shooting brittle paint; you can rely on it to shoot all day without showing signs of slowing down.

This marker would be a great choice for people looking for their first paintball experience. However, if you are searching for an electronic gun for speedball, this may not be the right choice for you.

I had an easy time using and maintaining my Planet Eclipse Emek. There is no spring for you to change or sears to wear. All you have is the efficient Gamma Core with its pneumatic automated firing mechanism that allows all kinds of players to fire quickly and accurately every time.

The quality bolt and drivetrain build mixed with the extremely low-operating pressure, as well as the Deftek feed implies that you will rarely experience paint breakages with this marker. This lets you focus on the battle as opposed to constantly cleaning up your gear.

And since it is a mechanically operated marker, you don’t have to worry about the failure of electric components as is the case in electric paintball guns. To dismantle the gun and get to the engine, you just need to undo 2 screws and one egg-shaped gasket; a breeze even for inexperienced users.

This marker has a sturdy build that makes it suitable for long-term use despite the rough conditions you expose it to. The Gamma Core ensures that the gun keeps on delivering in all kinds of weather and doesn’t care when the last time you re-lubed the marker was.

You’ll eventually get bored from the lack of maintenance needs in this marker. It keeps on shooting consistently and puts the paint where you want it to go time after time.

There is no bolt that needs pulling back like on the Tippman, you won’t keep running into a firefight just to “fix” a gun than simply needed a bolt engaged.  It is a more efficient shooter that would be great for woodsball and offer a nice upgrade from the Tippmann Cronus.

Overall, the Planet Eclipse Emek is a practical and impressive paintball gun. It is extremely light and shoots easily with a high consistency rate. I like the array of standard features on offer, especially when you consider the budget price tag of under $250 it comes with.

Plus the way it works with the PALs Hopper, is just next level for a budget option. You can get 20 shots off before needing to shake the hopper, which is beyond any non-electrical hopper’s performance.

It is a good option for players looking to taste the mechanical paintball experience, as well as serious mechanical players looking for a competitive device. Whether you just want to ditch the batteries on your marker or simply searching for a great paintball gun, you can’t afford to leave the Emek out of your options. 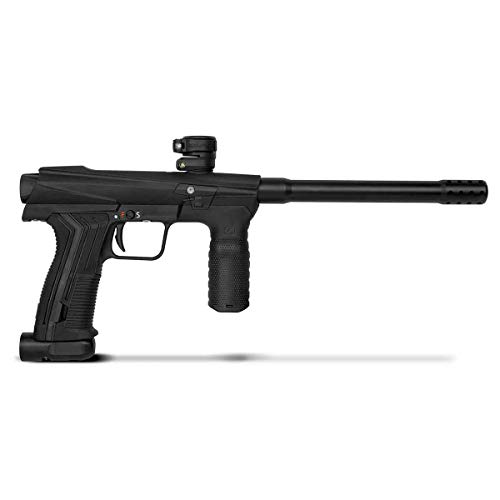