The Empire Mini GS is a lightweight, comfortable, quiet, and functional marker that you can rely on the paintball play zone. It is the perfect size for kids but adults with large hands might find it uncomfortable to use. Aside from the minor manufacturing issues, it gets a nod from PBGuy. 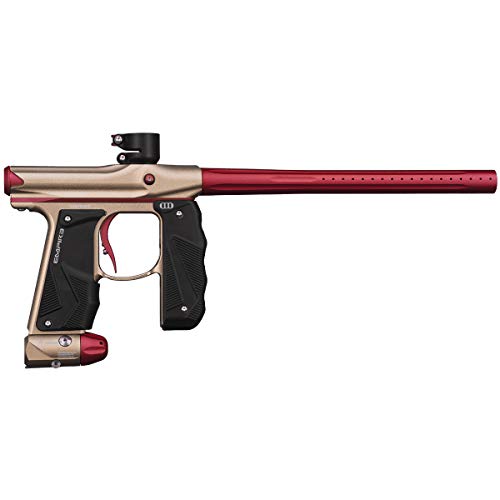 The Empire Mini GS paintball gun has caused quite a buzz in the paintball world for proving to be one of the best markers for both beginner and intermediate use in the market today. Empire did a good job on this 2nd generation model by fine-tuning the minor issues and flaws in its initial version.

They managed to create an absolute beast in the Mini GS that is arguably the most cost-effective paintball gun you can acquire. If you consider yourself an intermediate paintball player trying to make a leap from your starter pack, this will be the perfect partner in crime. It beats out any marker in its price range and possesses the feel of a top-shelf paintball gun.

Now, I’m not trying to get you overexcited but it would be unfair if I didn’t commend Empire. They paid attention to customer complaints and recommendations from the initial version and considered them in the new design; resulting in an improved and more functional model.

The Empire Mini GS has shown tremendous success in the paintball play zone. It features an improved grip for more comfort. You also get new features and several upgrades that show the technology Empire invested in this model.

This marker further adds an On/Off ASA that rids of any thread issues, allowing for seamless removal of the tank. As an extra bonus, the new model makes for an easy drop-in of its Redline OLED board without having to switch the foregrip.

The Empire is a quality speedball marker! And although its primary design and function are best suited for speedball, it will seamlessly fit in any type of game. Let’s take a closer look at what the Empire Mini Gs has got going for it:

Not much preparation is required to get the Mini GS firing. Straight from the package, it fires at around 275 ft p.s, but give it more time and you’ll be firing your balls at 293 ft p.s before you know it. You can easily set up the breeze with an Allen wrench.

Remember to take advantage of the 45/4500 HPA tank that allows you to shoot 100,000 paintballs before needing a refill. This will keep you going even when your rivals have run out of steam. Unlike the initial version, you won’t have to worry about the recoil.

At just about 1 inch, you’ll barely hear a sound, allowing you to remain composed in the heat of the game. The Mini GS is a stealthy and versatile marker that performs just as well for left-handed users as it does for right-handed ones.

However, you should be warned that some buyers have previously shared that their Mini GS was a total disaster upon purchase. I have a strong feeling this was a result of inadequate quality control from the manufacturer; a common occurrence.

Generally, the majority of defects experienced include things like leaking HPA tanks, solenoid breaks, sub-normal FPS, etc. If you are unlucky enough to find any of these issues on your new Mini GS, I suggest you seek a refund or the appropriate replacement.

When it comes to basic operations, this paintball gun has had positive reviews in general. Most users tend to choose it over its competitors. You’ll be happy that it performs just like more sophisticated ultra-guns at a higher price category.

Rubber grips ensure that it will feel comfortable in your hands with no chance of slipping out. There is barely a learning curve with this gun, meaning it will only take you a short while to get the gist of it. All you need is just about 10 minutes to set it up by configuring LED indicators to the desired style of play and voila!

All the features on the Mini GS have great durability. You won’t have to worry about it breaking down despite constant and intense use. The aluminum frame, though lightweight and mini, is remarkably tough and long-lasting.

The rubber grip helps to maintain the shape of the marker and its feel over time. We also fell in love with the upgraded design from a feedneck to a clamping feedneck. Apart from giving you an easy time in securing your hopper to the marker, it also contributes to the gun’s durability.

The Mini GS comes with an inventive micro-switch trigger that will produce a distinctive click whenever you pull the trigger. What this does is enable you to feel each shot you take so that it gets simpler to master every successive shot.

If you’ve ever worked with the Axe/Axe Pro, you will feel right at home with this remarkable feature. The trigger further consists of tournament regulation setups like Mill-Sim and PSP, ensuring that you are tournament-ready.

Another improvement from the old model is this exciting feature that I’m sure you’ll relish in the Mni GS. The On/Off ASA function makes it extremely easy to take out the tank.

This makes sure that you don’t waste time removing and attaching back the tank in situations that require quick action. It is a convenient extra that makes it stand out from the crowd.

Maintenance is obviously a critical aspect when it comes to playing paintball. It influences your performance, accuracy, and consistency while paintballing. You should know that the GS takes a while to master its maintenance.

If you are not experienced enough, don’t rush to dismantle the marker. Rather, take the time to learn about the ideal cleaning and maintenance before performing any of these activities.

There are multiple tiny bolts and pieces that you will have to remove and spread out. Luckily, you can get a lot of helpful tutorials on YouTube that will keep your gun in peak shape.

The Empire Mini GS is a great speedball marker that is perfectly suited for an intermediate player not planning to spend a fortune on his new marker. It is very functional and offers general ease of use. It has a durable build that also feels comfortable in your hands.

Furthermore, it allows you to fire quickly and continuously with very little recoil or noise to deal with. This is the perfect gun to use in a high-stake paintball game that requires you to be stealthy and efficient.

Nevertheless, the small frame might be a deal-breaker for people taller people or those with larger hands. It might be quite uncomfortable and cumbersome to hold and fire off a “tiny” gun. Luckily, there’s always an option you can consider. If you wish your Mini GS was a little bit bigger, why not try the Empire Axe? It has all the features you’ll find in its brother, just in a larger size!