A customizable lightweight paintball gun with an aluminum body that can use different kinds of paintball calibers. It’s overall a very accurate and versatile paintball gun

The Dye Dam was made with tactical paintball players in mind, the first thing you will notice when you take a look at the Dye Dam, is the quality of its design, because it is a marker that was made for seasoned players, and not for beginners. The gun also feels very comfortable to hold, and very smooth when fired. The reason this gun is so popular comes down to the fact that the manufacturers finally listened to their customers and gave them what they wanted. By incorporating the suggestions they received from their customers, they have created one of the best paintball guns on the market.

The Dye Dam has a dual sided magazine, that allows you to use either first strike paintballs, or .68 caliber paintballs, it also has a built in dust cover that slides into place, and prevents dust and other debris from getting into the magazine, which gives the marker optimal performance, and also makes it easy for you to clean.

Another feature that the Dye Dam Assault Matrix has, is the on the fly or OTF system. This system allows you to easily switch from the magazine to the hopper, and back to the magazine, with relative ease, allowing you to choose your ideal firing mode more easily. 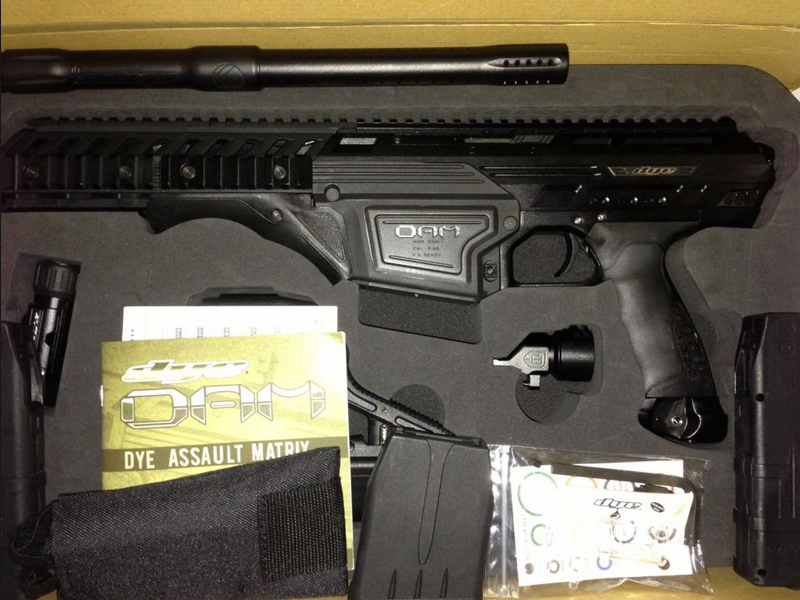 The guys at Dye have definitely outdone themselves with this high performance marker, which not only looks the part, but gives the type of performance you would expect from a paintball marker of its caliber. The tactical grips allow you to move around and target other players easily, without worrying about the gun slipping out of your hands. The On The Fly firing mode makes switching from firing modes very seamless, the Picatinny rails also allow you to accessorize the gun as you see fit.

The Dye Dam Assault Matrix is a paintball gun that can be used by both beginners and experts, but it was clearly designed for people who have experience playing paintball. The features that the gun has, as well as its accuracy and mobility it gives users, make it a must have for anybody that considers themselves a paintball enthusiast. The gun also comes in four different colors, which gives you a few options to choose from.